And then switch to this with tactics in game: 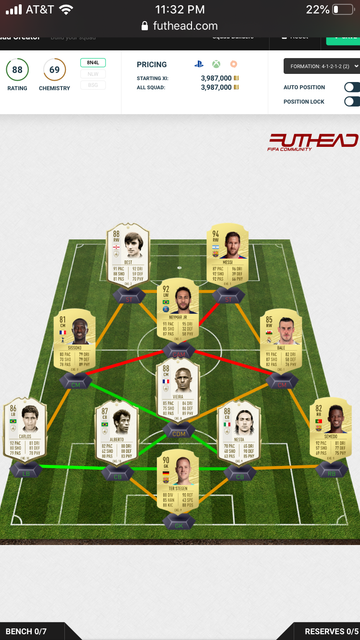 Probably have 1.5 mil if I sell my TP, which can be done easily.

Not getting rid of: Carlos Alberto, Semedo, Vieira, Neymar

I was planning to replace Sissoko with Scream Firmino and let that be my team. Now I’m having second thoughts. 800k is a lot for a CM, and would he really be worth it over other options? I could plug in any French, Brazilian, or Ligue 1 player. Allan? Pogba? Kante? Would they provide similar production for much less?

And if I do one of those, then what? I honestly really like Bale as my other CM. Messi has been my best scorer, but he hasn’t felt quite as good lately. Best scores a ton but also frustrates me a lot. Should I ship him off and buy Cruyff? Should I save up for TOTY Messi? Should I save up for someone like Pele or Eusebio?

Opinions are welcome and greatly appreciated!