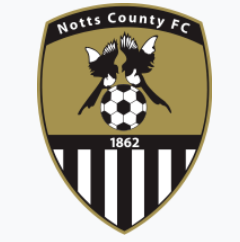 Notts County Football Club is a professional association football club based in Nottingham, England. The team participates in the National League, the fifth tier of the English football league system. Founded in 1862, they are the oldest professional association football club in the world, and predate the Football Association itself. The club became one of the 12 founder members of the Football League in 1888. They are nicknamed the "Magpies" due to the black and white colour of their home strip, which inspired Italian club Juventus to adopt the colours for their kit in 1903. After playing at different home grounds during their first fifty years, including Trent Bridge, the club moved to Meadow Lane in 1910 and have remained there since. Notts County hold a local rivalry with city neighbours Nottingham Forest, as well as with other nearby clubs such as Mansfield Town. Notts County finished third in the top flight of English football in the 1890–91 season, which, together with the same achievement 10 seasons later, remains their highest ever league position. They also reached the 1891 FA Cup Final, finishing as runners-up to Blackburn Rovers. However three years later the club won the 1894 FA Cup Final with a 4–1 victory over Bolton Wanderers. From 1897 until 1920 they played in the First Division which was then the top flight, barring the 1913–14 season when they won the Second Division immediately following relegation the previous year. They won the Second Division for a third time in the 1922–23 campaign, before suffering relegations down to the Third Division South, which they won in their first attempt in 1930–31.

The club were back in the Third Division South by World War II, but were again promoted as champions in 1949–50 and spent most of the 1950s in the second tier before successive relegations saw them drop back into the Fourth Division. County won promotion as runners-up in 1959–60. They returned to the fourth tier by 1964, but were promoted as champions in the 1970–71 season, before securing promotion out of the Third Division under the stewardship of Jimmy Sirrel in 1972–73. They made their return to the top flight by finishing as runners-up of the Second Division in 1980–81. County were relegated after a three-season stay, and ended the decade back in the third tier before Neil Warnock masterminded play-off successes in 1990 and 1991 that saw them promoted back into the top flight. However, they were immediately relegated, thus missing out on the first-ever season of Premier League football. They fell back into the basement division by 1997–98, but managed to finish the season as champions. Following a financial crisis they were relegated again in 2004, before they won the League Two title in 2009–10 amid a takeover bid from a Middle Eastern consortium that eventually fell through despite great publicity and initial expectations. County were relegated back to the bottom tier at the end of the 2014–15 season, and remained there until the end of the 2018–19 season, when they were relegated from the Football League for the first time.