Welcome to the Serie A lounge! In here you can discuss anything related to the Serie A or the Italian national team. Talk about your FUT teams and get opinions & suggestions by your fellow forumers, discuss informs & potential informs, talk about cup, league and Champions League matches, transfers, or just about anything that may be happening or going on in the Serie A.

A list of all Serie A players in FUT16 can be found here, or you can scroll down a bit on this post to see short reviews of informs as well as non inform Serie A players. 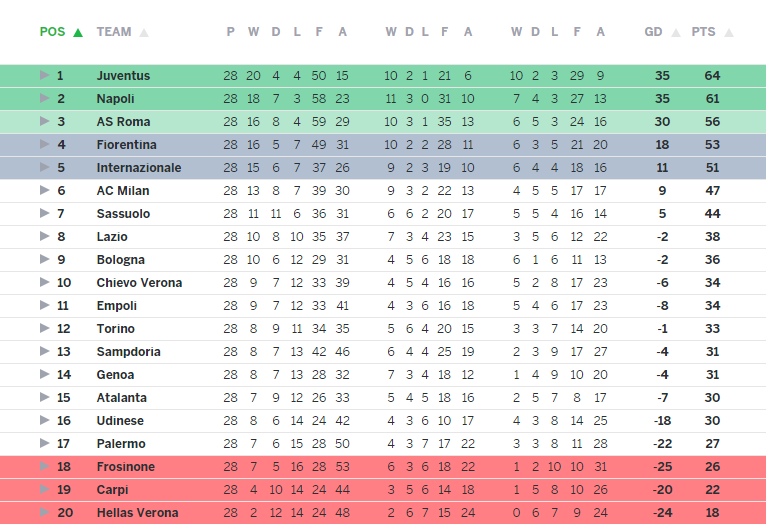 CB
-IF Manolas:
"I waited almost a week to buy him and after his price finally had dropped to an acceptable level, i finally bought him. He seems different to other pacey CB's in the game, he seems to get across the ground very quickly and is also a lot more agile than most other central defenders. He is caught out of position from time to time, but it is a sacrfice im willing to make. A different kind of CB, but very, very good and you will be surprised when you first try him. Value for money: 7/10. Overall: 8.5/10" -@MaTaDoRz

LM/LW/RM/RW
-IF Insigne:
-IF Bonaventura:

CF/ST
-IF Higuain:
-IF Bacca:
"Will finish just about anything inside the box whether it's with his head or feet (2* weak foot is not a problem). Can also take the occasional longshot with him. Only downside is 2* skills but LT+RT (L2+R2) dribbling works like a charm. Worth the coins, imo. 8/10"- @Rick

"Incredible off the ball movement and positioning, lethal shooting, and has solid strength as well. Only 2* skills and 2* WF, however, he's still a wonderful player. 8.5/10" -@Lights

-Diego Lopez:
"Lopez is great at getting to things, but often needs to snatch at a palmed shot in order to catch the ball. Don't let me put you off though, he has done some serious superman goalkeeping, and his high kicking stat is great for the counter attack. 7.5/10" -@LawrieC

LB/RB
-Radu:
"Is a good defender, but tends to charge forward ahead on many occasions which can be frustrating. 6.5/10" -@LawrieC

"If you like defensive fullbacks, he's a great choice. I want my fullbacks to be dangerous in attack, hence I didn't like this guy - he offers absolutely nothing in attack. If you don't need your fullback to attack, just put "Stay back while attacking" instruction on him and enjoy the brick wall. 6-8/10" -@LoboNobo

-Maicon:
"Reminds me of how he was in the FIFA 11 days: great at pushing forward and brilliant at bullying people off the ball. 8/10" -@LawrieC

-Zuniga:
"Someone I want to replace. He's fast and has okay passing but tends to forget he's a LB and is also right footed with a 2* weak foot, which is pretty lame for a LB. 6/10" -@LawrieC

-Lichtsteiner:
"A solid RB. Good crossing and decent passing. High/high is nice too for this position. 8/10" -@LawrieC

-I. Cissoko:
"A very solid RB. Fast, strong and good tackling. His H/H workrates means he's always onthe move but rarely gets caught out for me. If he does he manages to recover well. Solid. 7/10" -@Shadepanther

"With pace not being that much of a factor this year, Glik is one of the best defensive options in the league considering his price. The only letdown is his turning - if you're defending with him, you need to be careful. Also, he wins practically every header - just like IRL. 8/10" -@LoboNobo

-Manolas:
"He is a complete beast. Absolutely rapid and a good tackler however with him being in TOTW I can't really recommend buying him at this point. 8.5/10" -@LawrieC

-Castan:
"New in the team but from what I've seen I'd say that he's fantastic. Makes ridiculous tackles that would be penalties if Glik/Manolas did them, and is strong and fast. Give him a shot. 9/10" -@LawrieC

-Juan Jesus:
"Jesus is fast and strong. I hope to replace him because I feel a little too "Beast FC" with him in my team. 8/10" -@LawrieC

-Diakite:
"A big Strong fast tough tackling CB who dominates in the air. He imposes himself well and has scored quite a few corners for me. You will know when he is on the pitch. 8/10" -@Shadepanther

-Bonucci:
"Strong, excellent in the air and relatively quick too, oh and never out of position. Overall a very good defender, one of the best if not the best NIF CB in the league. Value for money: 8/10. Overall: 9/10" -@MaTaDoRz

-Totti:
"Can be slow to turn round and receive the ball, but his passing and shooting are mesmerising. 9/10" -@LawrieC

-Medel:
"Medel is outstanding for what he does. He wins the ball back so much for me, as well as winning headers against huge players. His passing lets him down at times but I am more than happy to have him in the team. 7.5/10" -@LawrieC

-Valero:
"Valero is a star. I originally had Pjanic in this position but their stats are so similar and Valero is so much cheaper that I had to try him out, and if anything I prefer him. 8/10" -@LawrieC

-Hernanes:
"Another 4*5* player and he is truly incredible. Best FK taker I have used (within Serie A) and his long shot goals are racking up. His passing is sublime, he's pretty much my favourite player just now. 9.5/10" -@LawrieC

-De Rossi:
"Puts in a typical shift and does his job really well. Great tackler with high intensity and wins loads of headers in midfield, but don't try to do anything too fancy with his passes. 8.5/10" -@LawrieC

-Allan:
"Great ball winner, does a lot of interceptions. Thanks to decent pace and agility he's not only great at tackling and chasing opponents; you can keep the ball under pressure with him as well. IMO better version of Medel. 8/10" -@LoboNobo

-Hamsik:
"Very disappointed with him. Lots of people claim he's great, but he just doesn't work for me. His dribbling stats are not good enough for CAM, it's hard to keep the ball with him under pressure. He's a great passer though - he does slightly better in CM spot, but not good enough for me. 5/10" -@LoboNobo

-Insigne:
"Really mixed feelings about him. On one hand, his pace, dribbling and agility (95 - the highest among gold players!) makes him almost unstoppable - whether you speed dribble or dribble in tight space. On the other hand though, he has one, huge disadvantage, and that is his strength. He gets pushed off the ball really easily - you need to be perfect with his dribbling if you want him to shine. Definitely to use in wide CAM spot (4-2-3-1 or 4-2-2-2). 7/10" -@LoboNobo

-Lulic:
"While he doesn't really shine in any aspect, he is an extremely balanced player - perfect box-to-box. He will track back and defend well, he can pass and hold on the ball, he will make good runs and score a few as well. Great cheap option if you can't afford any top players. 7/10" -@LoboNobo

-Sturaro:
"Reminds me of UT13 Nocerino (but bald). He gets about the pitch and while he isn't amazing at any one thing he is good to very good at pretty much everything. A very good engine in the middle. 7/10" -@Shadepanther

LM/LW/RM/RW
-Perisic:
"His 4* skills and 5* weak foot make him a perfect LW. He charges into the box using skill and can shoot either near post or curl it in to the opposite corner. His size makes him formidable too. Cannot recommend enough, drop your pacey wingers and try this guy out. 8/10" -@LawrieC

-Candreva:
"He is good, but perhaps doesn't feel like his price just now. Perhaps that's just me though. A great crosser and has a nice shot. 7/10" -@LawrieC

-Kishna:
"Not very good at all. Falls over too easily and is in general a weak link in the attack, doesnt excel in any area of the game. The only positive i can think of is the 5* skill moves, which is nice, but not enough to salvage this player for me. Value for money: 7/10. Overall: 5/10" -@MaTaDoRz

-Salah:
"Very fast and extremely agile. Similiar to Messi pace, dribbling and agility wise. He can beat players really easily and if you give him any space, he'll make you pay. Best right sided player in the league after Cuadrado and for the price an absolute steal. Value for money: 9/10. Overall: 8/10" -@MaTaDoRz

-Felipe Anderson:
"When i first had him, i really didnt think much of him, thought he was average at best. Decided to give him another go and he was like a different player, constantly involved and as a sort of added bonus to his pace and dribbling, he does have pretty decent longshots too. Works very well as a LM in a 4231. Value for money: 8/10. Overall: 8/10" -@MaTaDoRz

CF/ST
-Balotelli:
"Complete striker. 4*4*, strength, pace and decent passing ability compliments his shooting skill well. His let down is his work rate, and sometimes you have to force him to make runs. 7.5/10" -@LawrieC

-Menez:
"Great with a fantastic intensity and a decent strong foot shot. Great ball control and dribbling too. 8.5/10" -@LawrieC

-Dybala:
"Hasn't actually scored much for me but has won at least 10 penalties in 8 games, and so to me his place in the team is justified. Great at getting back and winning the ball back too. 8/10" -@LawrieC

-Mandzukic:
"Solid lone striker. I rarely finesse with him, as his power shot feels unique. His edge of box power shots are very low and driven to the corner which I love. Once you know how to time crosses too he becomes fantastic. 8.5/10" -@LawrieC

-Rossi:
"Probably the best cheap striker in the league. Fantastic finishing and great dribbling makes him almost unstoppable in the box, and he can pass the ball as well. Also "Avoids Using Weaker Foot" trait is IMO very useful - he will usually take a shot with his deadly left. Good workrates as well. 8/10" -@LoboNobo

-Morata:
"Very good finisher, and that's pretty much it. Quite strong on the ball, but he turns like a tank, which makes it hard to dribble with him. Still, he still gets a fair amount of goals - headers, tap-ins, rebounds - he seems to be in the right time in the right space quite often. Maybe use him as a "super-sub"? ;) 5/10" -@LoboNobo

-Pazzini:
"A great player for holding up the ball and scoring. His heading is brilliant. He leaps like a salmon and gets a lot of power and accuracy. If you have a good crosser and can time them well he will score for fun. His finishing on the ground is also very impressive. Very good for edge of the box shots or slipping him in behind. His dribbling is ok and certainly good enough to beat players in the box. The main downside is his pace. He generally won't outpace centre backs but he is insanely cheap. 9/10" -@Shadepanther

-Jovetic:
"A very good all round striker. Great shots and passing. Quite good in the air and fairly fast (enough to get slipped in behind and away). Very cheap for his abilities. 8/10" -@Shadepanther

-Cassano:
"Extremely good if you need a creative CF/CAM. A very good passer, through balls and little layoff passes are his speciality, not to forget crossing which is also solid. He does have low agility and low pace, which means that he does not turn very quickly, however he does keep the ball very close to his feet and even when under pressure by 2-3 opponents he is still extremely difficult to dispossess. Perfect playmaker. Value for money: 10/10. Overall: 8/10" -@MaTaDoRz