Anyway, lets talk Dele, he's been crap in real life for Everton barely playing but he's a card with an Everton badge and I had to do him 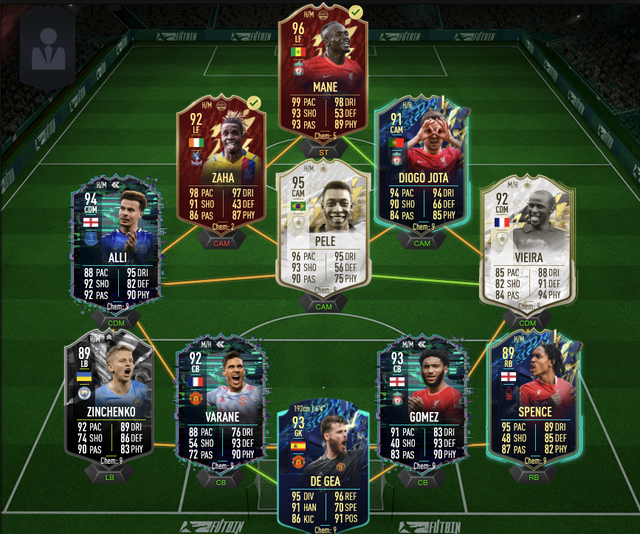 I 100% recommend shadow. Hunter gives the pace boost and shooting boost isn't noticeable. Gladiator was used purely because I have a million of them and wanted to see what he would be like without the pace boost, which it is definitely needed.

It is simply superb, he finishes like a striker and for a B2B midfielder I've found him breaking into the box late to have a pop at goal or hitting a finesse on the edge of the area which for the most part, hits the target.

I'd say the difference between having the hunter chem style applied and not isn't even noticable.

Another midfielder with excellent passing! He's no Xavi but you can definitely rely on him to find his passes. One thing I've transitioned to is playing more of a possession game and baiting the opponent in, sending a winger on a run but then moving the ball to a CDM and then hitting a ball over the top... Dele finds them everytime and it's helped a lot in matches.

With the shadow/hunter he's great and he can move about the pitch really well. I'd say he felt similar to PIM Vieira or maybe a bit quicker which I suspect is to do with the body type.

I can definitely see where people say he's clunky, but it's not the worst in the world and again, he's similar to Vieira. You can definitely turn with him in the midfield but you will get caught out by a nippier attacker and robbed of the ball.

Skill moves pull off quite well, they aren't slow but they aren't quick either... so I guess bang average is what I'm going for here.

Body type is unique but he has a more Gullit body type in game which I hope explains a lot.

He is definitely not a CAM

Now this is the most surprising thing, without the shadow he was great. He would bully players off the ball, tackle and mostly intercept the ball. Which is surprising given he has low interceptions.

I stuck a shadow on him because I was getting annoyed by the missed interceptions and afterwards this has improved a lot. So now I have the complete B2B midfielder who can burst into the box but also defend like a beaver (Classic Kammy).

Not great surprise here, he's a monster with his physicals and can push people off the ball, shield the ball and even win a fair amount of headers. For the guys who like targetmen types, he reminds me of how Moyes used Fellaini when you play him in CAM, just hit the ball to him and flick it on or bring it down shielding.

He is a very very good CDM. I've used Prime Gullit and compared them (albeit I hated Gullit) and I would say Dele is a better version of him. When I used Gullit, he would bomb forward but never seemed effectual in the defensive side of the game. Gullit also used to drift wide despite asking him to play central and this left massive holes in the midfield. Dele doesn't do any of this.

If you're looking to take Gullit from swaps, save the tokens and go open the fodder packs, you'll get TOTS players and fodder to complete Dele for nothing and in my opinion, you'll get a better player for it as well.

I don't think he's a CAM at all, I struggled to use him there. He's a CM/CDM or even ST, you just need that ability to wiggle as a CAM which he doesn't have at all.

- Tad clunky due to body type