FC Barceloneta used to be an active club established near Christmas 2020 by a couple of friends who played for a different club before creating this one. We had 42 Division 1 titles and were ranked 186th in the world on the PS4 version of FIFA 21 and won the last season of PGS 6's Championship. 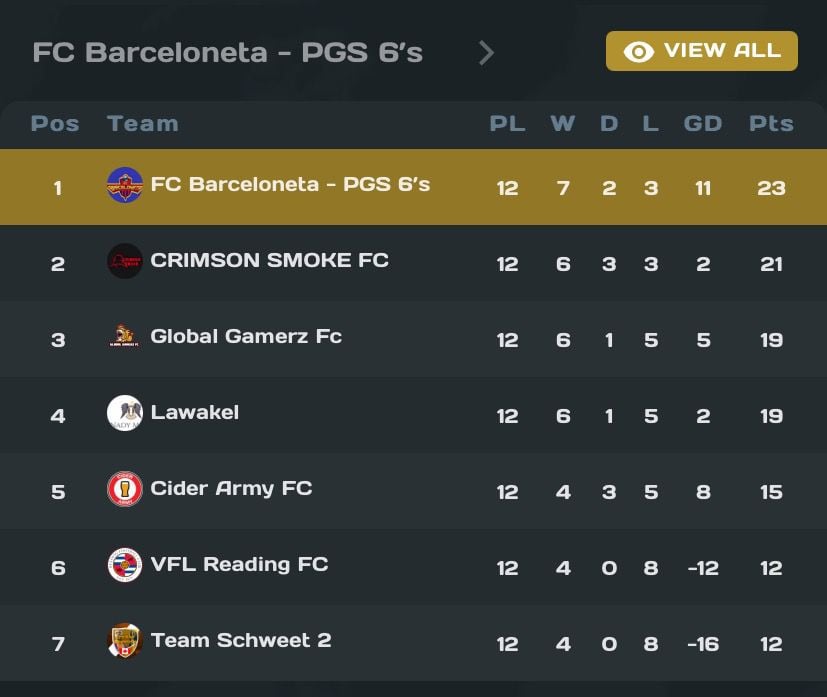 Due to the difficulty of purchasing a PS5, the club is currently spread out between players that still own a PS4 and players that own a PS5. Because of this, we aren't as active on both consoles as we used to be. My co-founder friend is still on the PS4 as where I have gone to the PS5 version of FIFA completely now together with a handful of FC Barceloneta members. It is our ambition to get the club active again in the way that it used to be. Until the core members of FC Barcelonetta have all switched to the PS5, we'd like to get a few trials in strictly for the PS5 version of FIFA 22 Pro Clubs.

At this moment we are in Division 10. That's not at all where we want to be as we wish to be competing in Division 1 ASAP. Therefore this is the kind of trial we are looking for:

CB: Just play as a CB should. If you are good and strong on headers you will be the target man when we have corners or long Free Kicks in our favour. One of the smaller players (and the CDM) will cover your position to stop a counter-attack. Be careful conceding penalties. Accidents happen but be smart

RB/LB: Steady and calm wingbacks who can defend well (this is a must) but also build-up play with the midfielders. Also can target the attackers with precision crosses (not too often though).

GK: The most important player on the pitch. If you as a GK mess up. We all mess up. So looking for that GK who is extremely confident in goal and can take the pressure that rests on his shoulders every game.
If you're a footballing GK that gets involved in play from the defensive line without taking unnecessary and stupid risks then you're the GK we are looking for.

We are looking for 20+ aged players and have a club where the atmosphere is good and so is the chemistry. This means that we have fun while playing on the top level.

Our playstyle: We try to ensure accuracy of passing, We aren't looking for players that keep rushing and join the attack constantly because if we all run forward or keep rushing, we expose ourselves to the stupid counter opportunities to our opponents, just keep your position and easy quick passes, one-touch or a delicate through-ball! If you spam high balls constantly you are not the player we are looking for!

What else do you need to know:

- We need players that play online 3-5 nights a week (if you can't play that much, don't bother asking for a trial), more would be great. We usually play every day from around 10 PM (GMT) onwards. You need good experience in pro clubs.

- When you trial for a position we expect you to play on that position. We will let you play a few games and then let you know if you’ve passed your trial or not.
- We use ANY depending on the players that are online.
- We don't use headsets
- We have a PSN group chat

Want to join us?