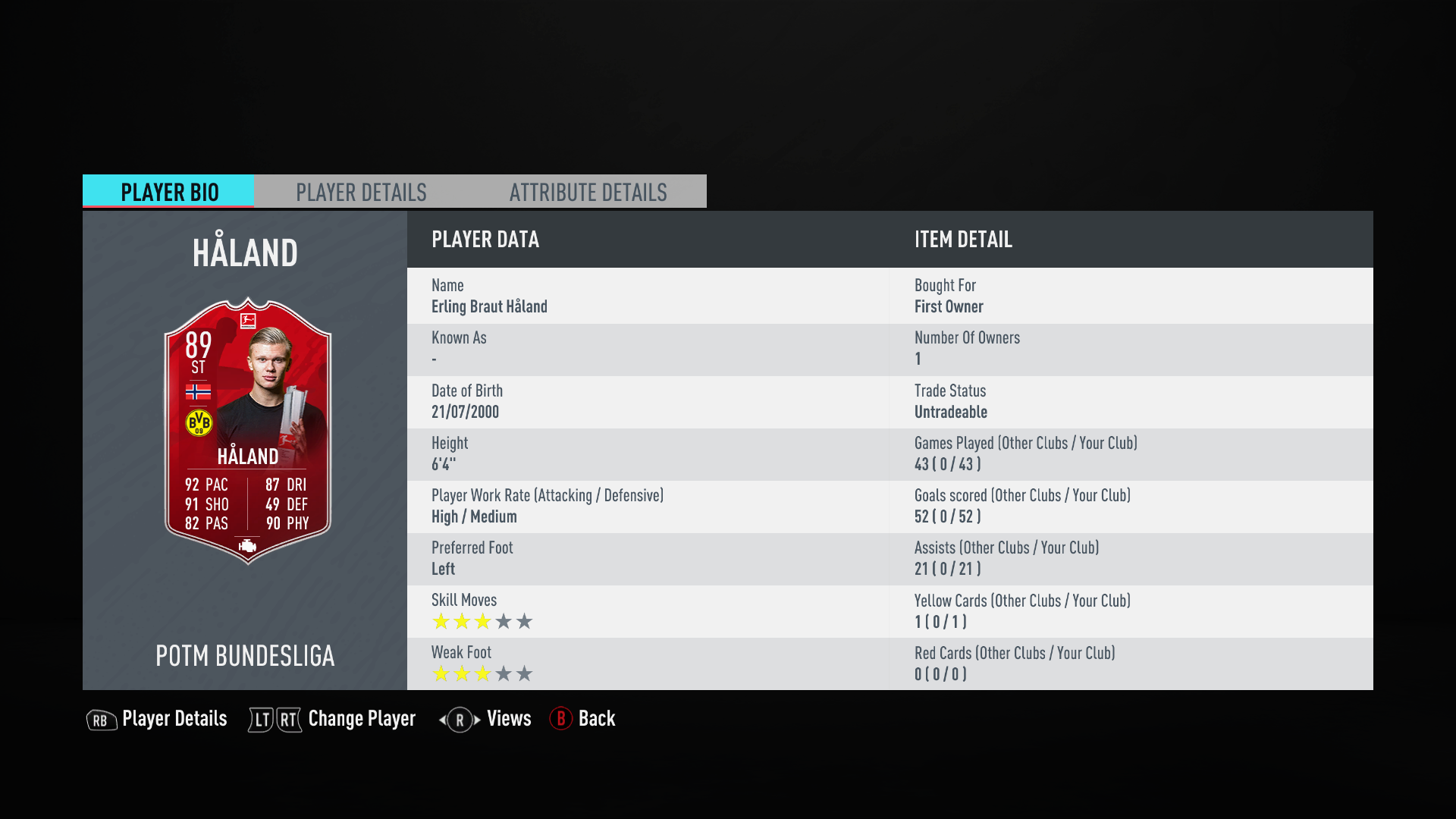 I am one of the probably few people who decided to complete the Erling Braut Haaland Bundesliga Player of the Month SBC when he was released last week. Since then, I have used him for 43 games, in which he scored 52 goals and assisted another 21. The games included a full weekend league (30 games) plus some Division Rivals (Div 5 and 4). I used him with an engine chemistry style to boost pace, dribbling, and (less importantly) passing. Here are my impressions of him:

Pace: On his card, Haaland has got 92 pace. Due to the distribution of stats (acceleration being quite a bit lower than sprint speed), he does not feel as rapid as this value would suggest. Nevertheless, he is definitely fast enough to gain the space needed for him to get into good positions for shots on goal.

Shooting: The shooting is Haaland's biggest strength. 91 is certainly no lie and all the individual stats (apart from the modest 80 longshots, which is kind of irrelevant in the game) are fantastic: 94 positioning, 93 finishing, 96 shot power, 91 volleys, and 93 penalties means that whenever he gets close to goal and unleashes a shot, chances are very good that he'll at least test the keeper, most often finding the back of the net. If you are looking for a clinical finisher, Erling is certainly your man. Another positive aspect is that he has got the finesse shot trait. The only downside to his shooting is his 3* weak foot which is quite noticeable (even though I scored quite a few with it too).

Dribbling: 87 dribbling does not look bad with most of the ingame values being around that. The only slightly lower stats are his agility and balance at 79 and 78, which can be boosted with the appropriate chemistry styles. One should still be aware that he sometimes feels a bit clunky and not as responsive as players with higher ingame stats. For me, this was no major problem though.

Passing: 82 passing on his card already looks decent, but 84 vision and 99 (!) short passing as well as 99 (!) curve is even more impressive. I felt like he was a really good passer and always found his nearby teammates. Maybe one could also consider using him as a target man to lay off some passes to wingers.

Defending: Mostly irrelevant for a striker, yet I found that he was very good at winning the ball back after losing possession, most likely due to his very high aggression of 91.

Physical: Probably the unique selling point of Haaland is his impressive physique: 6'4'' with brilliant strength (94) and his pace make him a one of a kind striker, maybe only paralleled by Zlatan Ibrahimovic. Whenever he gets his body between defender and goal with the ball at his feet, you know that his opponents will have a hard time getting it back.

Overall verdict: POTM Haaland is the most unique player I have used all year and a fun one, too. He does have some weaknesses, but for me, he is a very fun card to use. If you can fit him and have the coins to spare (760k is certainly no bargain), I cannot recommend him enough. He will bring a lot of joy to your team.