UN5Y
52 posts Park Captain
October 11, 2019 8:21PM edited October 2019
Welcome to my management journal. My name is Antti Saarinen and I am the manager of 1860 München. I have decided to run a journal on my journey into football management, following my progress and documenting my successes and challenges along the way. I hope to inspire other footballers and coaches into making the step up into football management. 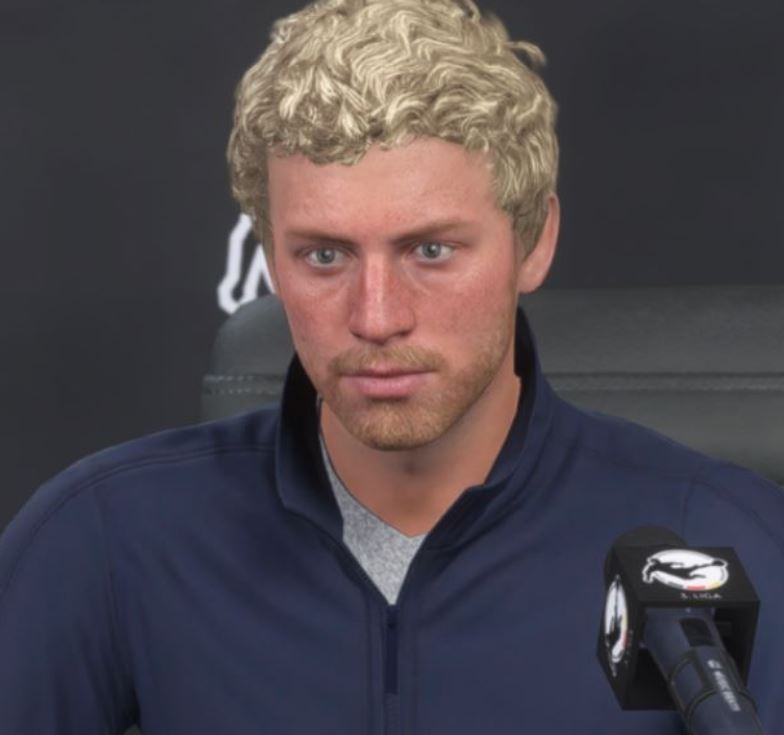 I retired from playing in August of this year; I enjoyed a wonderful career and made many memories that will stay with me forever. I don't want to focus too much on this so I have inserted a snippet about my career from Fifapedia. Note: this was the first time I ever searched for myself on the site. 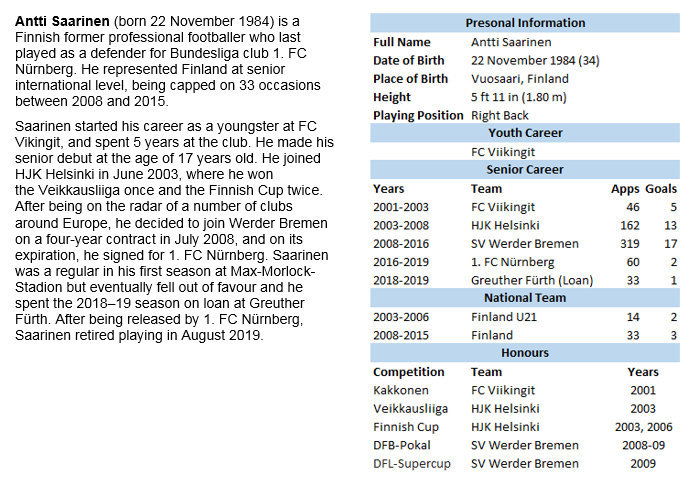 What has been missed in the above snap shot is that I was actually offered a unique opportunity whilst on loan at Greuther Furth. They allowed me to coach and manage their Under 18's side, whilst playing for the senior team. I loved every moment of being the manager of that side, and we finished 3rd in a very competitive youth division.

My other coaching experience was with one of Nurnberg's younger sides. I spent the latter years of my playing career mostly focusing on my coaching and completing my badges. I always put 100% effort into playing and training, but towards the end, especially my season at Greuther Furth, I got much more mental enjoyment out of managing, and coaching, which really helped me decide to retire when I did. It helped me a lot that I knew what my next career path was after playing, where as I know a lot of players struggle with that.

I actually had a few offers, believe it or not, after I decided to retire and expressed an interest about going into management immediately. 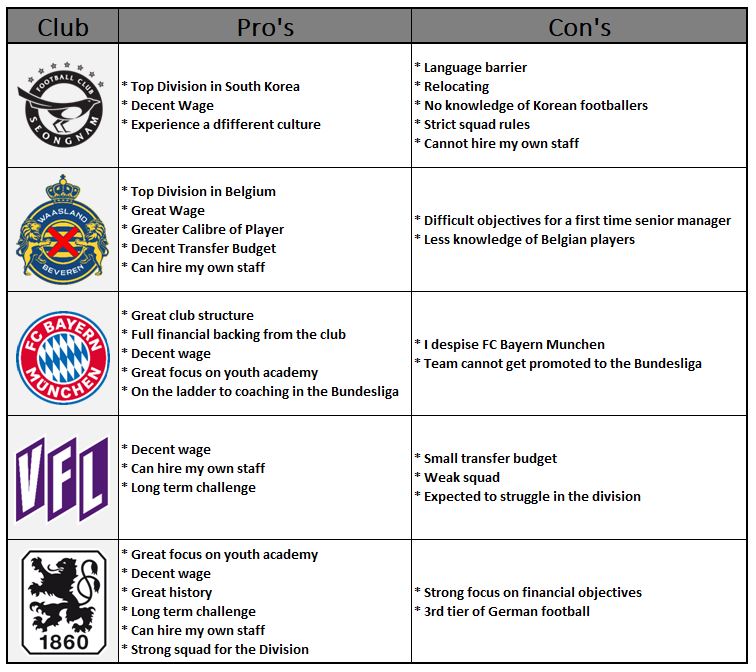 I decided to take the job at 1860 München due to the history of the club and their focus on utilising their youth academy. I was welcomed to bring in my own staff. They had a ready-made squad, which had every chance of performing well in the 3. Liga.

I attended a meeting with the club Chairman, Michael Scharold, to go over the objectives for the season. It was stressed to me that I need to invest in new youth academy players, whilst developing the youngsters we already have. I must also work hard to make a financial profit by the end of the season, in addition to the profit margins the club want to keep the wage bill similar, however will allow an increase of up to 20%. In terms of performance on the pitch, Scharold explained the club would love a run in the cup; however, focus should be on achieving a respectable mid-table finish.

In football you make lots of friends throughout the business, you start networking from the beginning of your career and every now and again you come across someone who just gets you, and understands the way you think and shares the same philosophies as you. Well I found that in my good friend Jussi Maarkonen. We played together for a season at HJK Helsinki and was regularly in same Finland camp together, where we would room share when travelling away.

Jussi retired last season after a decent playing career. He finished his career with 28 caps for Finland and won the UEFA Cup with Zenit Saint Petersburg.

He has been the assistant manager at HJK Helsinki for the last 12 months, and his experience will be invaluable. I have hired Jussi as the Assistant Manager.

I only brought in one additional member of staff, as 1860 already had plenty of backroom staff working with the club, who have been doing a great job, so I did not want to upset the apple cart.

I employed a coach who worked with Jussi and myself in the Finland setup. Teemu Aaltonen is a specialist performance coach. He has developed a system to rate players and track progress. Each player receives ratings out of 100 for each of their attributes. It is a fascinating system, which you will get to see in action plentiful throughout this journey. I have great faith in it, however the ins and outs of it I very much leave to Teemu.

We have now spent a couple of weeks looking over the lads and along with Teemu; we have compiled a report on the players. See below for details: 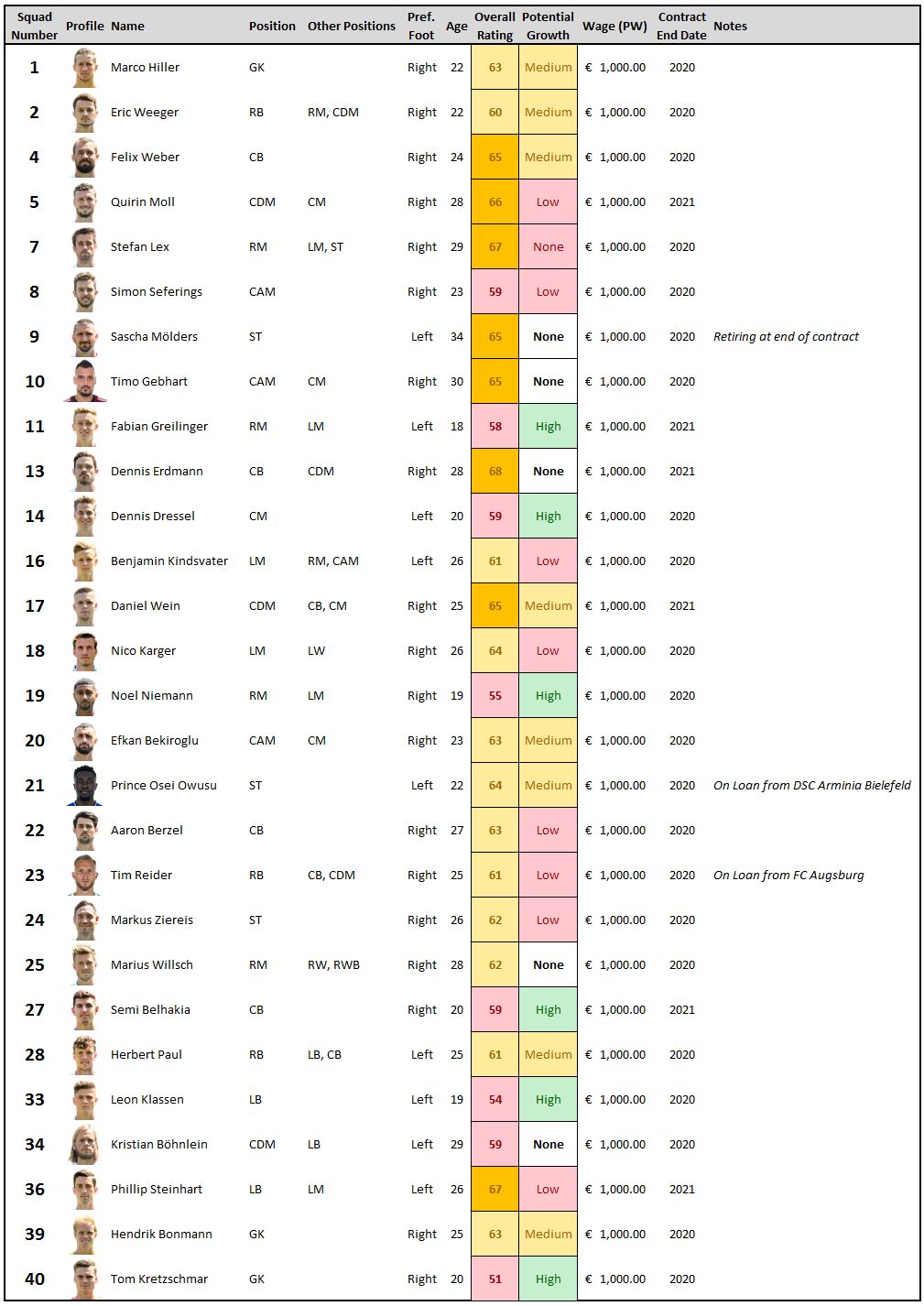 My first initial reaction when looking at the squad was how big it was. I always enjoyed being part of a close-knit squad and that I understood my role within the squad. 28 players will provide a lot of uncertainty around individual player roles and it restricts game time for many of the younger players.

I will like to work with a smaller squad, and provide good senior level game time for all the players involved. I will be looking into offloading a few players on loan as well selling some players I deem surplus to the squad requirements, obviously taking into account the possibility of injuries.

Other notable observations was the amount of players out of contract at the end of the season. 77% of the 26 contracted players finish their current contracts in 2020. Instead of letting some leave as free agents, I am going to try to cash in on them early.

We have some good young players who I will be putting onto training programs to enhance their development.

We have a good average age of 24-25 years old in the squad. I will be looking to keep this age range at a similar level, as I believe it to be a good mixture of potential and experience.

Nico Karger is the longest serving current member of the squad having been here since 2015.

The current club captain is Felix Weber; I have no issues with him remaining in that role. I am going to assign Sascha Mölders and newcomer Dennis Erdmann as vice captains.

My first port of call was to send out the scouts to find some investable young talent for the academy. I sent Karl Becker around the local leagues. I then sent the more experienced Moritz Winkler, who hails from Austria, to meet up with an old friend of mine in Finland to scout the young talent of my home nation. We have some great young players in Finland, some of which are not picked up by bigger clubs around Europe simply due to lack of exposure. An expense I felt was necessary, however it took some convincing to get the green light.

The summer transfer market was unremarkable in terms of my own input. I did not add to the current crop of players, former manager, Daniel Bierofka, before his departure, had signed all the new players joining up this season.

My real only input was more of an output. I let a few players go out on loan to gain first team experience and sold a further 3 players who were deemed expendable. The main reason for the departure of the more senior players was to garner some extra revenue to satisfy the clubs financial goals and because I could not guarantee them the playing time, they would have expected. Below is a summary of my summer transfer window transactions. 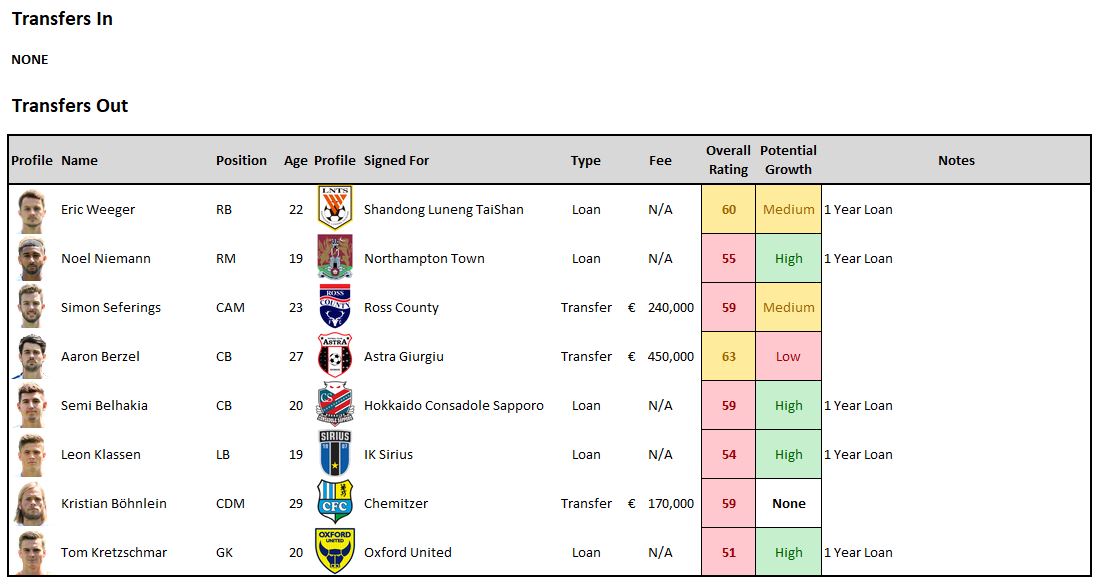 My next instalment will focus on the first half of the season.
Post edited by UN5Y on October 2019
0