Sign In · Register
FIFA
FIFA Forums › General Discussion
Check out the pitch notes for an update on upcoming content here.

The latest Title Update for FIFA 20 is now available on console & PC and includes the changes listed here.

number7rocky
4985 posts Big Money Move
October 1, 2019 4:31PM
Still.... I honestly feel close to giving up, I'm not enjoying it at all. There's zero balance between attacking and defending and it feels as unrewarding as ever.

As a consistent elite 3 player the last few years I can't believe my decline on this version of the game so far. Conceding so many and feel powerless, like I'm going to condede on every attack. I find my current skill rating embarrassing, in the 1300's. I'm absolutely dreading WL. I do have some low scoring games but I don't get clean sheets at all. I track runs, I'm not lunging in, but I hardly get the ball back cleanly.

Half my tackles bounce back to the opponent yet I get tackled and they get the ball nearly every time. I know I am bad at defending right now but so many times I feel punished even when I do get a good tackle/block in.

50 or so rivals games and I'm on LESS skill rating than what I started on, losing games to starter squads, I know how I'm supposed to defend but it just not working for me. I use L2, L2 R2, I'm also on lowish width yet through middle my players part like the red sea even if I've got players behind the ball and there always seems like massive amounts of space for shots on my goal. If I track the run, people instead just bang finesse shots top bins outside the box. I score some goals like this but I don't know why my defenders don't make the same amount of blocks and interceptions and if they ever do it normally bounces back to the opponent.

It also feels like I'm working so much harder to score than the opponent, they get everyone behind the ball and thier ai makes interceptions and blocks that my players never make or rarely do. My opponents keeper makes goal saving saves yet my keeper seems to let everything in (Neuer)

Classic goal for me to concede right here, tackle he keeps the ball and I concede, I never get these my way. 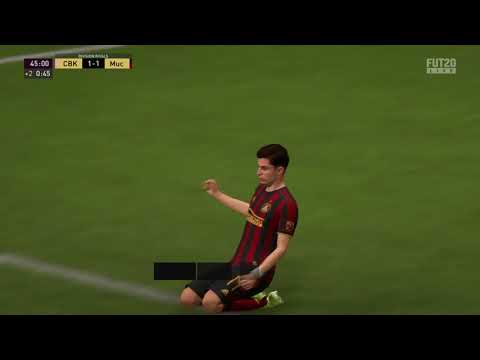