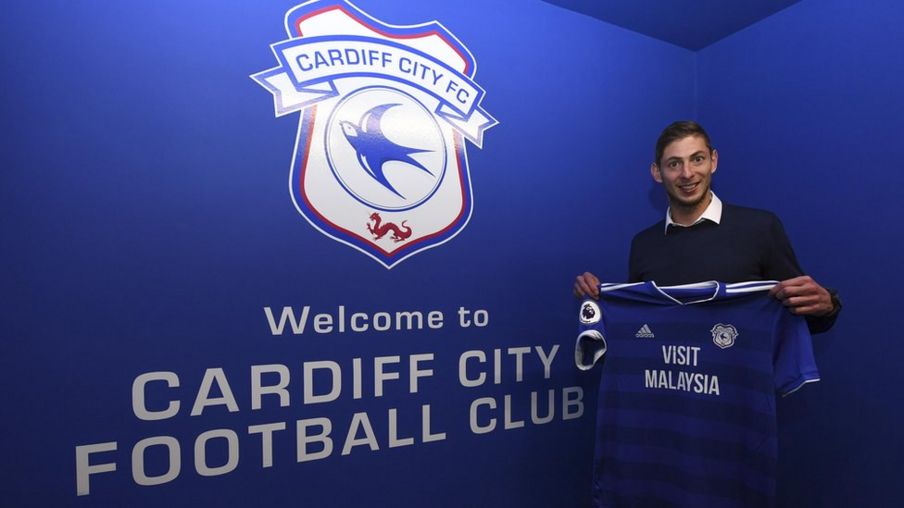 Premier League footballer Emiliano Sala was on a light aircraft which went missing over the Channel Islands, the French Civil Aviation authority said.

The Argentine striker was one of two people on board the Piper Malibu which lost contact off Alderney in the Channel Islands on Monday night.

Cardiff City signed the 28-year-old for a club-record £15m fee from French club Nantes on Saturday.

Guernsey Police said there was "no trace" of the Cardiff-bound aircraft.

A plane similar to this is reported to have lost contact near the Casquets lighthouse
It left Nantes at 19:15 and had been flying at 5,000ft when it contacted Jersey air traffic control requesting descent, the force said.

Sightings of red flares were reported during a lifeboat and helicopter search, but "nothing of significance was found", a Channel Islands Air Search spokeswoman said.

Cardiff City signed the 28-year-old from French club Nantes
Police said on Tuesday more than 1,000sq miles had been searched by five aircraft and two lifeboats. The search had resumed after being called off overnight "due to strengthening winds, worsening sea conditions and reducing visibility".

Cardiff Airport confirmed the aircraft was due to arrive from Nantes but a spokeswoman said there were no further details.

"It's far easier to see something on the surface in daylight," he said. "We are looking for any traces of an aircraft, a life raft, persons in the water, life jackets."

The Met Office said conditions were not "too intense" at the time the aircraft went missing but had become wetter and windier later in the evening.


Emiliano Sala told Cardiff City he wanted to "start training and get down to work"
Cardiff signed Sala for a club record fee after protracted negotiations with Nantes and he was due to join his new teammates for training on Tuesday.

He has been among the top scorers in France in recent years and had scored 13 league and cup goals this season, third behind Kylian Mbappe and Nicolas Pepe.

'Last goodbye'
When his move to Cardiff was announced, he said: "It gives me great pleasure and I can't wait to start training, meet my new teammates and get down to work."

The most recent tweet from Sala's account was a picture of him and his former team-mates, captioned "La ultima ciao", or "the last goodbye".

Sala began his playing career at Argentine side Club Proyecto Crecer, before moving to French club Girondins Bordeaux in 2012.

His previous side, Nantes, has postponed its games against Entente on Wednesday and St Etienne on Saturday, according to its match schedule.

The flight disappeared off radar near the Casquets lighthouse, infamous among mariners as the site of many shipwrecks, 8 miles (13km) north-west of Alderney.

HM Coastguard said the disappearance was not in the UK search and rescue area, but it had sent two helicopters to help.

A spokeswoman said they were assisting Guernsey Coastguard with a search for a light aircraft off Alderney.

"HM Coastguard helicopters from Solent and Newquay have been helping to search overnight with nothing found," she said.