Sign In · Register
FIFA
FIFA Forums › Archived Boards › Career Mode
We are aware of an issue with FUT Crashing for Virgin media users & we are working on this. Apologies for the inconvenience this is causing. We have a thread discussing it here. 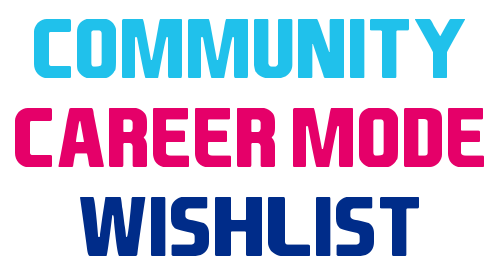 Ever since it was first introduced on FIFA 2000, Career Mode has been one of the most popular modes in the game. With next year marking 20 years since the mode was first introduced (in a multiple season format with transfers) interest is still high and the number of suggestions for improvements is higher than ever.

With this high demand, a single unified community Career Mode Wishlist can help identify which features are most desired. Several high profile supporters of the mode have backed this wishlist idea and so we give you this thread. The main place for the wishlist will be on this thread but Game Changers, Content Creators and other FIFA Personalities will be gathering suggestions. We will gather the suggestions together into a poll so that the community can vote for their favourite suggestions.

Closing date for suggestions to be included in the poll: TBC


Please note this wishlist is nothing to do with EA. The outcome of this wishlist does not guarantee a suggestion will be included in FIFA.