Sign In · Register
FIFA
FIFA Forums › Archived Boards › FIFA 17 › Career Mode
The latest Title Update for FIFA 20 is now available on PC and includes the changes listed here.
------------------
Note: The SBCs issue has been resolved, details posted on this thread in a tweet from FIFA Direct Communication.

TeamExtreme17
2616 posts Fans' Favourite
June 5, 2017 5:30PM edited July 2017
I'm sorry to come across as rude, but I will NOT be buying your game anymore if you haven't listened to all the fans suggestions on your OFFICIAL FORUM this year (not Twitter or YouTube!) to improve career mode..

* create your manager's appearance (like create a player) instead of having to use the in-game avatars. (including normal gear and cold weather gear)

* bring back game face. (this would be beneficial to the above and also player career ^)

* Let us chose REAL managers that are actually in the game.

* overhaul edit player, there is a bug called the cold weather gear that hasn't been fixed for years.

* show player profile pictures for ALL players, even if it's their in-game starhead.

* Balon D'or / World Footballer Of The Year awards (including cut-scenes)

* stadium exteriors, why does Wembley have an exterior view in The Journey but not career mode?

* realistic transfers, why do Man Utd sign Lewandowski when they have Rooney, Ibrahimovic, Martial & Rashford!? If they make a big signing then in real life they'd sell too, not have them all sat on the bench.

* create a stadium, you had this in Fifa Manager? ( 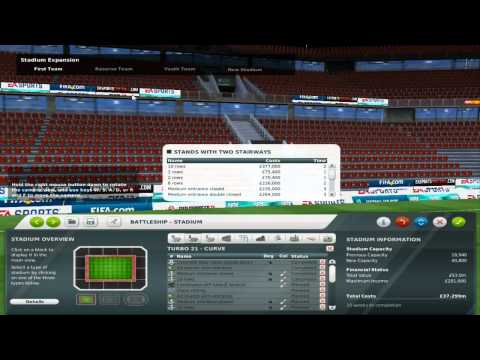 * option to set club captain & vice-captain when you take over a club / country,

* loan players should not be able to play against you if you loan them out, and they shouldn't be available for you when you play a team you have a loaned player from either. (think Januzaj against Man Utd).

* option to buy a player and a send a player going on loan the other way.

* when you edit a players squad number, show who's number it is replacing, that way you know if the number is free or not.

* realistic scouting results, why am I being suggested players like Ronaldo when I am Stoke?

* add the option of only searching for players within your budget.

* start as an international manager.

* auto training, players should still train if I don't do them manually.

* change the competitions badge on players sleeves depending on the competition. (this means the badge should be a separate entity to the players shirt, not etched into it like it has been since Fifa 2000). champions cup would then have generic sleeve badges and when you get promoted to the PL you will have the PL badge on your sleeve.

* add arena effect to the soundtrack when in the in-game menu, to create the feeling of being at the stadium (this is in PES)

* Why decide to stop making Fifa Manager and then not use any of the things from that game in Fifa?

* Option to turn Real Fixtures On or Off.

* Option to use Icons in Career Mode, turning them to On would see them be available to sign from Free Agents.

* Option to start jobless and wait for offers.

* Option to start halfway through a season.

* Option to start in chosen league at Early, Middle, or End of pre-season (First league game: To cut out pre-season altogether)

* Play Football Manager to see how a manager mode should be.

@Rob @Alastair Please tell EA to read all of these great fans' suggestions off their official forum, instead of Twitter / YouTube, the game is a mess and these things are such simple things that should of been added years ago. If they thoroughly read this site, they will realise we are doing all their work for them. (check great threads like The Fifa 17 Stadiums Thread, The Fifa 17 Starhead Thread, Devs Are Ignoring SIMPLE But IMPORTANT Things!, GOAL NET, Unrealistic Shirt Fonts etc)

P.S. It would be nice if this thread could be stickied to the top of the Fifa 18 Career Mode section, for EA to read and take note from their hardcore Career mode users? @Rob @Alastair
Post edited by TeamExtreme17 on July 2017
0