those are the gifs of the crosses. wanna learn them. then read

So we are not here today to talk about the art of heading but to talk about the art of crossing. Crossing is the hidden talent that runs the form of direct football. It's the engine behind the steam train itself. So many variations of it but i'm going to quickly show you 3 of the most effective and easy to learn ways to send in bombers to your strikers to smash home. Now take in mind it takes some time and effort to perfect or even get a hang of it but like most crossing masters say. Just keep sending them in and surely you'll put one away.

Preparation: Make sure you are not being completely pulled down while you are trying to cross. and make sure you are not facing more then 90 degrees away from your target *example* - facing slightly towards the corner while you're about to send it in. Most of the time, Won't end well. Facing slightly towards the net and no more away then looking at the end line however will result in more successful corners .

X (simple cross): This is what you'll want to use in most situations. If you could put a percentage of consistency ide say 60-80%.

LB+X: This cross is most effective to send the ball far post for a lurking target man in that direction. This combo is best used 18 yards away from the goal line and at times is 90% consistent if used properly. But be aware using this in the wrong situation can send the ball no where near your desired target. *Revert to Cross 1/2*

X(x2): This kind of cross is mostly effective when the crosser has more of a direct line of sight to the striker (preferably medium range cross towards the front post. *Revert to Cross 3*

X(x3): Now this kind of cross is best used when your crosser is within 6 yards of the end line and between the edge lines of 6 yard box and 18 yard box. The thing about this cross this year it seems to be slightly less effective then previous FIFA's due to the fact this year you can just A pass into the box from that position and 1 tap shoot it and score.
This kind of cross can be VERY deadly to your opposition if used correctly.*Revert to Cross 3*

Now that you know the kinds of crosses i'm going to show you the 3 most crosses you are going to be wanting to use.

Cross #1 'The edge of 18' - Example
In this kind of cross you're going to be wanting to use the LB+X cross from the edge of the 18 to find the far post striker and is most effective to finish off a counter attack. Now when it comes beautiful crosses needs to be beautiful positioning and this is the hardest to judge if it's the correct time to do it. You usually want the striker on the edge of the box or closer towards the net for this to work and a lot of the time strikers won't move anywhere near the penalty spot if not given enough time by the defensive line. Almost like an AI safety call for offside. 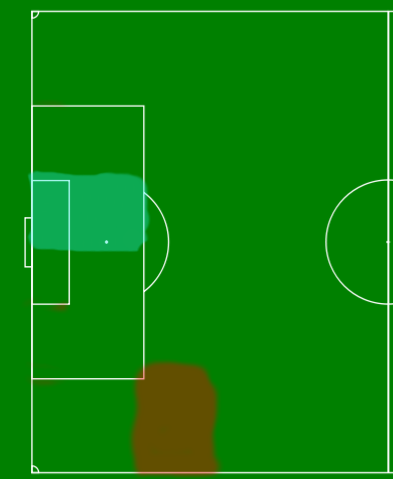 Cross #2 'The Cut back to 18' Example 1Example 2
Best used by clubs such as Barcelona, this cross is very similar to the previous kind of cross you just read about but this one is most effective when the play is already up in their third while 'The edge of 18' cross is best used for finishing off a quick attack. As you can see in the example all you do is run closer then 18 yards of the end line, cut back, then make it look like you're cutting inside all away to the top center of the box. In this cross you also perform a simple LB+X cross towards the far post.

Cross #3 'Sweaty cross' Example 1
Out of every cross there is. This is by far the most effective if properly done with the correct players. This cross focuses on taking advantage of your opponents slow reactions and large button delay/lag, and scored before they can even blink. As you read before the most effective cross for this will be the X(2x) or you can use the X(3x) if striker is in a closer position towards the keeper. But we're going to focus on the X(2x) for this. With this cross you're simply going to use some fast player or some specific kind of play to get into this position. This kind of cross will be more of a rare to happen but yet again the most effective (if you want to walcott that shit do this cross then by all means). To perform a successful 'Sweaty cross' it'll be best that when in proper position there is a clear path from you towards the striker and preferably your target is towards the front post. This will help prevent the goalie from hitting it away if it comes to that. But if your striker is anywhere around the penalty spot then it's fair game. As for your preparation/positioning. You'll want to be facing a little bit inwards towards the net instead of running directly towards the end line. Sometimes if done correctly your player will perform such an animation of passing the ball forward instead of towards the side. In this case it'll provide better accuracy

Hope you enjoyed what i spent the past hour of my life on and benefited from this and maybe improve your crossing in the upcoming year of FIFA 17. Feel free to ask any question regarding tactics or players or such. i'll be happy to ask, and i hope to see some new crossing meta teams around FIFA

. As for now #petercrouch4prez and im out

ALSO for those who be hating.